At the Saturday farmers market in Brunswick earlier this month, Ken Kurland was about to buy a crabcake from Maine Saltwater Creations when he handed it back, saying he hadn’t realized it was frozen. Being both nosy and a regular at the Brunswick-Topsham Land Trust Farmers’ Market at Crystal Spring Farm, I offered him cooking directions. He explained he couldn’t cook anything: he was headed to Belfast. On foot. On the East Coast Greenway.

Forget the crabcake. I wanted to know how an attorney from the Bronx came to be walking through Maine toward Canada. Source caught up with Kurland via cellphone as he and his traveling companion, Loredana Delucchi, wrapped up this installment of the East Coast Greenway in Belfast.

EYES ON THE PRIZE: The East Coast Greenway, in case you haven’t heard of it, is a trail in progress, running from Florida through Maine, and intended for bikers, walkers and hikers, like an Appalachian Trail but way more urban. (It is still a work in progress and in Maine part of it goes by the name the Eastern Trail.) Kurland, 63, recently retired from his job as the supervising lawyer in New York City’s Department of Housing Preservation & Development’s affordable housing program. That’s given him time to accelerate the pace on the long walk he started about five years ago from home to Canada, starting with the leg from New York City to New Haven (broken down into segments over four weekends). He does this to promote walking, but at the heart of it is his personal need to engage the practice of walking. “I like the idea of getting from one place to another on my own power. Even with a bike, it is something mechanical. I don’t like driving. I don’t like the idea of driving.” PACK MULE: Pollution is one aspect, but it goes beyond that. “I have a general disgust with car culture. People get too lazy.” And overly into their cars, which he finds puzzling. “The fetish behavior people have toward cars. To me, it is a mode of transportation.” An idling car is the worst. “Turn off your car if you are not using it.” When he needs groceries, he almost always walks, filling up a knapsack. “Anything less than an hour, I will walk there.” What about when he needs to stock up on bulky stuff like detergent and toilet paper? “I take a shopping cart if it is too heavy to carry. My wife will say, ‘We need a lot of food, you have to drive.’ If she comes with me, maybe we’ll drive.”

WALK THE WALK: Kurland has been a walker his whole life. “With a friend as a kid, I would always walk purposefully 5 or 6 miles. We’d just pick a destination and go there.” He joined a New Jersey group called FreeWalkers after reading a newspaper article about the group. Soon he was leading long walks in the Bronx and reading books about walking. (A recent favorite, “Pedestrianism: When Watching People Walk Was America’s Favorite Spectator Sport” by Matthew Algeo.) About 15 years ago, he walked from New York City to Albany. Then he started thinking about hitting the East Coast Greenway, taking longer and longer jaunts toward New Haven.

RESPECT THE WALK: He wishes that walking were more in fashion, like hiking. “We really don’t like how walking is not even respected today.” Hiking the Appalachian Trail gets you praise. “People think that is great. If I say I am walking from Portland to Belfast, they think I’m crazy.”

PENNY FOR YOUR THOUGHTS: On one of those early legs, he met Delucchi (“just a friend”) and they started walking together. Somewhere along the way – he thinks it was Westchester – she found a Canadian penny on the sidewalk. “She decided, that’s it, we walk to Canada and return the penny. She carries this Canadian penny with her on all the walks.” They’ve already reached out to the mayor of St. Stephen, the Canadian town just across the border from Calais, to discuss arrangements for returning it. “We will spend the day there and give them the penny.”

COUNTRY ROADS: In the meantime, there is the rest of Maine to get through. They’ll be back in a month to finish up the walk. They did the Kittery to Portland segment last year. How much time did they spend on roadways versus trails? “There was a nice trail in Portland at the beginning but almost the entire walk has been on roads, unlike other states where there are a lot of rail trails and canal trails.” At least the roads weren’t busy. “Most of the time it was on quiet country roads.” They saw goats, deer and lots of dogs. “You see lots of things you wouldn’t see driving a car, let alone riding a bike. Walking you see everything.” Kurland takes a load off his feet in a hotel. Photo courtesy of Loredana Delucchi

TRAIL TALKING: Kurland hits the road with a bumper sticker for FreeWalkers on his backpack, and he and Delucchi also have some literature about the trek they’ll share with anyone who is interested, but he’s no publicity hound. (Although the back of his FreeWalkers shirt does say “Walk With Us.”) There’s also a blue knit bear hanging off his knapsack. What’s that about? Delucchi started an organization called Knitting Without Borders, where volunteers knit bears for children worldwide who are receiving medical treatment. Her first batch of bears totaled 250, for the Shoe4Africa hospital in Kenya. Now volunteers have made over 5,000 bears for distribution in 20 countries. “Loredana must have knitted thousands herself,” Kurland said. Including one on her backpack (that’s where she keeps the Canadian penny) and his. “She wanted me to have one on my backpack too, so that her bear wouldn’t be lonely. I was happy to oblige.”

FOOTLOOSE: At the farmers market, his knapsack had looked noticeably manageable. What are his packing secrets? “Bring as little as possible. Two shirts. I bring a few shorts. The gym shorts type. Two pairs of socks.” They stay in hotels and wash out their clothes in the sink as needed. Oh, a rain poncho and baseball cap to keep the sun off are also essentials. And they both wear devices to track their steps. Kurland’s is a Fitbit.

THE LONGEST DAY: Over the course of the week in Maine, they walked over 300,000 steps. The longest day was 59,000. There were a lot of hills, Kurland said. Anything scary about being on the road? “Sometimes the shoulder is narrow and you have to walk single file, but the cars overcompensate generally.”

FRIENDLY NATIVES: Their best day was the stretch from Rockland to Lincolnville. Overcast skies made for a cooler walk, and the scenery was primo. Best meal? Long Grain in Camden (OK, we might have suggested that). They carry about 3 liters of water each every day, and a lot of protein bars. Kurland said he had too many good encounters with Mainers to remember them all. “Everyone was really nice. A lot of people offered us rides. They kind of missed the point.”

STEP IT UP: Now that he’s back to real life, you might think he’d take a hiatus from walking. Sometimes, at the end of a painful stretch of the East Coast Greenway, he said he has considered it. “I say, ‘I am not going to walk for another month. But the next day I want to go again.” A day without steps? “That day I don’t feel fulfilled.” 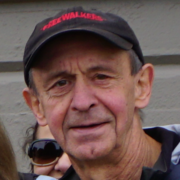 Paul is Executive Director and Founder of FreeWalkers