The following article is Art McDonald's reflection of his recent experience walking the 50-Mile Kennedy Walk. The article is appeared in a 2014 issue of Mensa Magazine. Art's from Rock Hill, South Carolina and a member of the Washington DC FreeWalkers. Walk on, Art! On February 9, 1963, Robert Kennedy answered the fitness challenge that President Kennedy had issued to Americans during that “can do” time. He, like thousands of other Americans, walked fifty miles.

Fifty-one years (almost to the day) later, I joined thirty other members of the Free Walkers, a social network for individuals who participate in distance walking events, for the second annual reenacting of Robert Kennedy’s walk. We took the identical path Kennedy hiked, going along the Chesapeake and Ohio Canal Tow Path from Great Falls, Maryland to Harpers Ferry, West Virginia.

It was a marvelous day.  The scenery by the Path, especially the Potomac River, was beautiful and the 35 degree, windless weather was pleasant. For the first twenty-five miles. Then I began to notice there was snow on the ground that one had to walk carefully over or around. There was little sunshine. The scenery became less interesting. The near-freezing temperatures were unpleasant. Fallen trees, once a curiosity, turned into obstacles to step around. Stepping over loose branches felt like climbing over small fences. Every mile seemed uphill. “Only forty miles left,” said jokingly, became “Don’t tell me we still have twenty-two miles to go.”

My brain was miles from the Mensa level. Thinking more of a 1960s song than of an abolitionist’s quixotic mission, I kept calling our destination “Harper Valley.” The names of the rest stops were forgotten. At one rest stop, I, who have never sang in pubs, much less in public, broke into a version of “The Weight.” Our leader, who no doubt was also feeling “half past dead,” and I sang alternate lines. 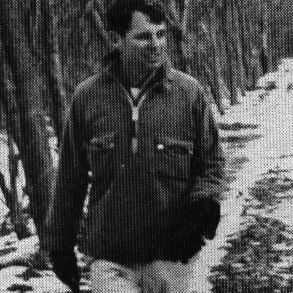 Like most of our group, I completed the walk. My time of just under eighteen hours was a bit slower than Kennedy’s 1963 time. He was twenty-three years younger than I am now, but that is offset by the fact he hiked in dress shoes. In endurance events, comparisons are far less relevant than finishing. Kennedy and I each walked fifty miles. That is all that matters.

So why accept extreme physical feats? Other than the historical aspect, why did I walk fifty miles?

It is about challenges. As President Kennedy said in explaining why we chose to go to the moon, life is about doing things “not because they are easy, but because they are hard.” It is beyond hard to ignore every muscle in one’s aging body and every part of one’s tired brain as they scream, “Quit!”

As it became darker and the mile markers seemed to get farther apart, and I got nearer the almost total exhaustion I would feel at the finish, the urge to quit became overwhelming. You fight it by thinking in terms of taking one more step or of making it to a point ten yards ahead and hope you do not wind up like one participant who became disoriented. I came close to quitting after about thirty-five miles, where, I later learned, the last of Kennedy’s hiking companions had dropped out.

One of my favorite quotes about Robert Kennedy is that “he refused to believe that there were things he could not do.” That quote pushed me on. I knew the discomfort would go away, but the knowledge that I had quit would not. And so, with blistered feet, horribly sore legs, a queasy stomach, bowels that threatened independence and a mind that was moving from blank to disoriented, I carried on.

Walking fifty miles is about setting an example for my sons and nephews, decades before it is needed. I hope that when they are my age (sixty), they will remember what I did. 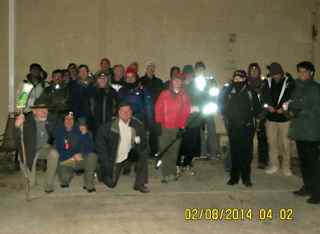 It is about fully exploiting the time we have.  I do not want to use the gift I received that close friends who have died did not, a longer life, to talk about how great things once were.  We should challenge ourselves daily and live in the present and for the future. People decades younger than I am are interested in my 2014 walk, not in some 1984 event that involves explaining what Lotus 1-2-3 was.

It is about being healthy. A slightly misspelt version of “Mensa” is in the expression mens sana in corpore sano. When you are in shape, every activity is more enjoyable. You can walk for miles in a new city, or play with your children for hours. You have mental energy. You have more stamina for every activity.

Ultimately, though, walking fifty miles is learning that you can pay the price for achievement. I am proud to have had the discipline to prepare for this challenge and to have completed the hike. I can say that I have at least one exceptional thing in common with Robert Kennedy, a man I admire greatly. The pain has gone away; this pride will last as long as I live.